How we do it: Using Span™ Workspace for sprint retrospectives 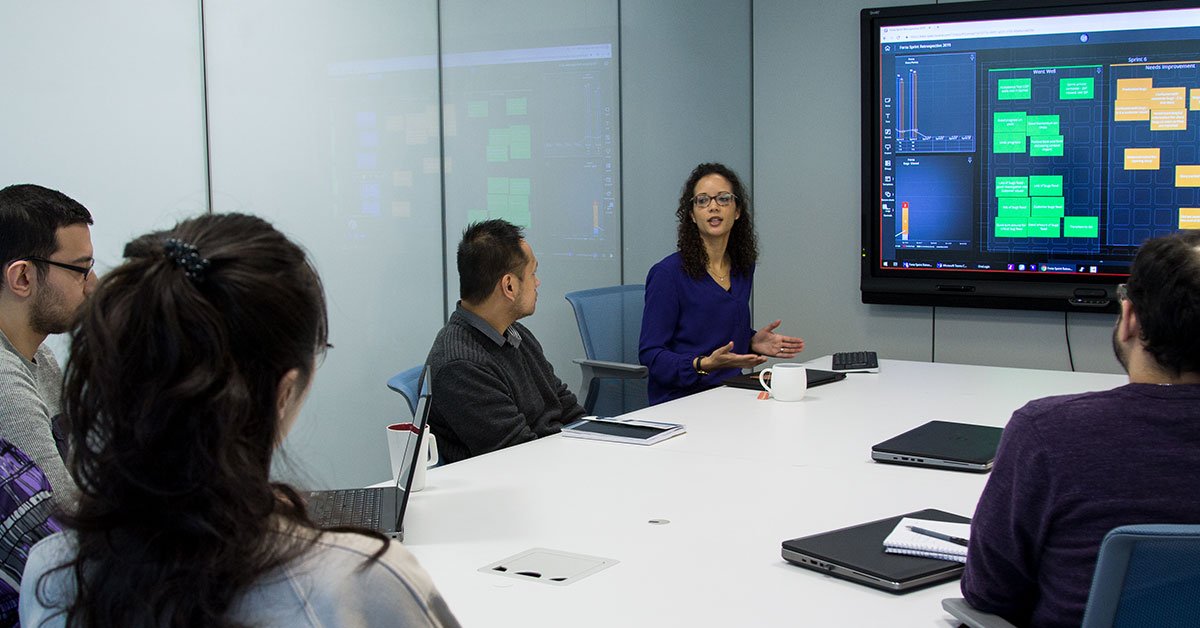 “If I miss one, the team will tell me right away. Once my meeting invitation expired, and I had people coming at me daily asking, ‘When’s the retro? You’ve got to schedule it.’ It’s really important,” he says.

Erik leads two agile teams at Nureva. Like other scrum masters here, he relies on retros and other scrum ceremonies to keep his teams happy, productive and empowered.

Hannah Henderson, another Nureva scrum master, agrees. “Retrospectives are an invaluable way to get feedback on a short look back,” she says. “It’s not about finger pointing. It’s asking why something happened and what can we do as a team to improve – team ownership of our outcomes and our commitments.”

Hannah and Erik use Span Workspace, our real-time visual collaboration solution, for every sprint retrospective meeting. They rely on the digital tool to keep things focused and collaborative, to capture all ideas and follow through with improvements. And they’ve come up with a few tricks along the way to tailor Span Workspace for their teams’ needs.

How to use Span Workspace for sprint retrospectives

When Erik and Hannah first started using Span Workspace for retros, they set up simple canvases with two main elements:

Once a Span Workspace canvas is set up, prep for each sprint retrospective meeting takes less than a minute – literally. Erik and Hannah just add space, duplicate the template and clear the content from the previous retro.

There’s a QuickShare group that always stays open on the canvas, so team members can contribute anonymous notes whenever they want (the QuickShare link is shared in the meeting invite or Microsoft® Teams channel). Hannah’s team makes all their contributions before the meeting starts – because they’re using QuickShare, they don’t see anyone else’s ideas.

Sharing ideas – Erik doesn’t require his team to add canvas contributions ahead of time, so meetings start with 5 minutes for note creation. Everyone can use the QuickShare link or scan a QR code on the Span Workspace canvas (open on an interactive display or Nureva™ Wall). It’s easy to contribute with phones, which keeps things focused.

Discussion – Once the QuickShare group is revealed, the scrum master kicks off the discussion. Every note on the canvas is anonymous – there’s no way to tell if something comes from a senior developer or an intern. All ideas get equal play without any subconscious bias creeping in.

Categorizing – As ideas gets discussed, they’re dragged from the QuickShare group into the template – notes automatically turn the right color. And it’s not just the scrum master using the canvas. Anyone can use their own devices to make changes in real time by logging into their Span Workspace account, including people joining the meeting remotely.

Action items – Notes can be dragged into the Actions column and edited to add the name of the person responsible. Or new actions can be created by anyone right in the meeting.

When the retro is done, it’s done. All the information is saved on the canvas. If more time is needed for certain discussion items, they stay on the canvas for next time. There’s no transcribing and no sending out meeting notes – the focus shifts to getting to work on the action items.

5 reasons why our teams love retros with Span Workspace

Span Workspace is simple to use and flexible enough to adapt to exactly how you run your retrospectives. Some teams skip the QuickShare step and instead use the personal tray to hold notes until they’re ready to submit. Others introduce different prompt questions at different stages of the discussion. Span Workspace is flexible enough to adapt to whatever process works best for the team.

Our scrum masters love using Span Workspace for their retrospectives – here are five reasons why:

1. Save prep and meeting time

Replacing paper sticky notes with digital ones has been a huge time-saver. “Once I have my template and my flow, it’s super fast,” Hannah says.

With Span Workspace, there’s virtually no prep work for scrum masters. And the team can cover way more ground during a retro, letting everyone reclaim valuable minutes for dev work.

“It’s very hard to do a retro in half an hour,” says Erik. “But we can do it with Span Workspace. It was impossible before.”

That time savings Span Workspace offers is a gift everyone appreciates. “If it took me half an hour to prep for a retro, an hour to do it and a half hour after, that’s four times as long as what I actually spend using the tools we have,” Erik says. “That’s a pretty significant value.” 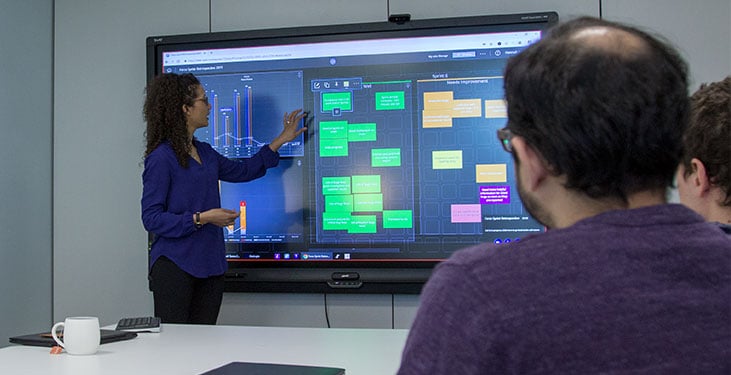 Digital tools don’t just save prep time – they eliminate the inevitable aftermath of scribbled-on whiteboards or piles of sticky notes.

“Before when we’d finish a retro, we’d take the stickies off the wall and then transcribe them into an email and send them out,” says Erik. “I don’t have time to do that! That would easily double the scrum master effort for a retrospective.”

Documenting paper-based retrospectives didn’t just take time – the results had questionable value. Erik can remember stacks of paper notes and chart paper accumulating under a previous scrum master’s desk. It was frustrating when an idea didn’t get discussed during a meeting and still ended up on the pile of discarded notes. “I asked myself, ‘Why did I contribute that feedback? It doesn’t mean anything.’”

With Span Workspace, results of previous sprints are always accessible on the canvas. If anything doesn’t get resolved in a meeting, it can be easily brought over to the next.

“I don’t have to dig for information,” says Hannah. “It’s not stored in different locations. It’s easy for me to save everything.”

3. Do right by remote people

“Stacey, our UX designer, attends retros remotely from Ottawa,” explains Hannah. “Including her fully would be absolutely impossible with an analog approach. She’s able to contribute, view, comment – participate in the retro in every way.”

One of Erik’s key stakeholders is based in Germany. Juggling meetings and deliverables around the different time zones can be tricky. But with Span Workspace, distance barriers are mitigated.

“Remote users can contribute to the canvas just the same as everyone else,” says Erik. “There’s almost no difference, whether they’re beside you or on the other side of the world.” 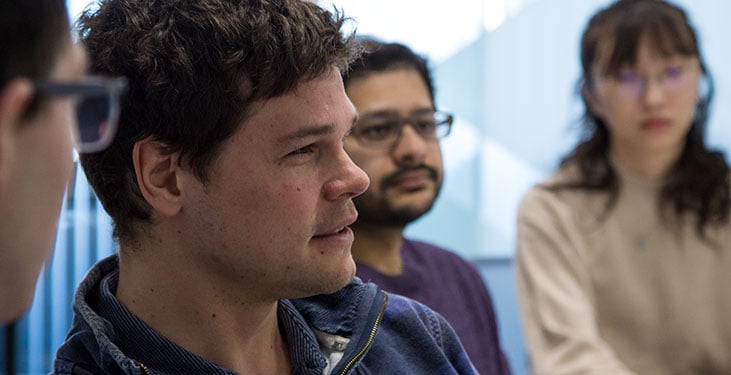 Erik remembers retrospectives from earlier in his career – the scrum master would do everything verbally and scribe the comments. The approach had clear flaws.

“You’d get a sort of groupthink going on, especially when senior developers made a statement,” he recalls. Suddenly everyone would pile onto one train of thought, and less senior people became reluctant to share differing viewpoints.

Using paper sticky notes was way better, but it was still easy to tell who had written what. Handwriting, note color or even the type of pen used could all identify the writer and subconsciously influence the discussion.

With Span Workspace, notes are totally anonymous, leading to much more divergent thinking. “I’ve seen a note say, ‘It was great we pulled in a stretch’ and another one say, ‘Why did we pull in a stretch?’” says Erik. “That contradiction starts a much more interesting conversation.”

Hannah has seen team members who rarely speak up in a group share notes on a canvas. “With a different process, other people might have spoken up first and got that attention, so that person might not have brought the comment forward.” 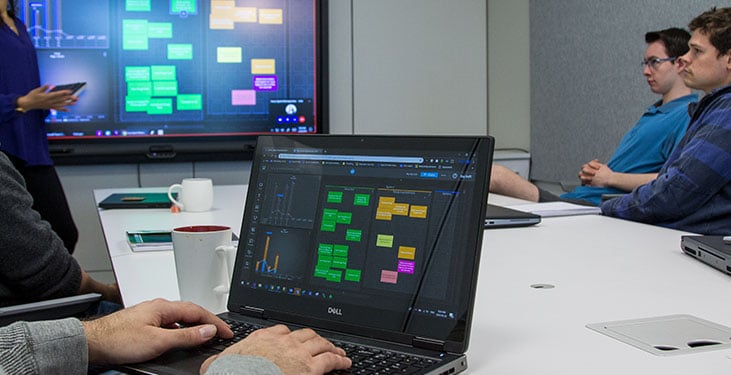 Keeping notes anonymous has another key benefit – it shifts the focus from the individuals to the team. When everyone knows who wrote what, comments stay attached to whoever wrote them.

When using Span Workspace, the idea is the most important thing. “The scrum master looks at the board and says, ‘The team feels this. Let’s talk about this,’” Erik explains. “The person who wrote the note may not even talk about it. It might be just a seed to a discussion.”

Retros with Span Workspace emphasize that concerns and challenges, successes and solutions are all team-owned. “This creates a discussion rather than an explanation and leads to more of a level playing field,” Erik says.

So when someone adds a note to apologize for something that went wrong, it becomes an opportunity for the team to rally around the person and show that everyone is in it together. “It’s so nice to have that team validation,” Hannah says.

Put your team in the fast lane

See how Span Workspace can help your scrum team with a free 30-day trial. No credit cards. No commitments. 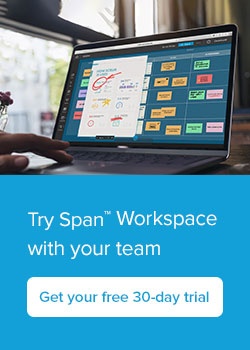 13 ways to avoid groupthink during your next retrospective