Design thinking fast-tracks collaboration at the University of Ottawa 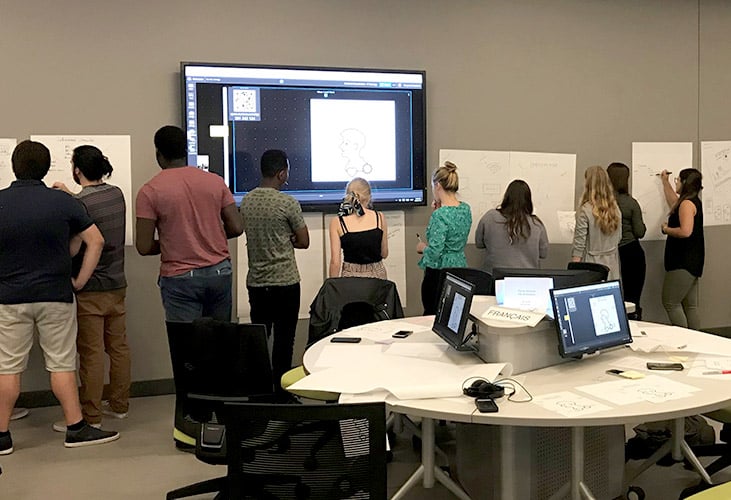 Two hours. Over 70 students. A whole lot of pizza.

It wasn’t the conventional way to kick off a major strategic IT initiative at the University of Ottawa. But for CIO Martin Bernier, it was just what he needed.

Martin’s team was tasked with developing a new technology strategy to improve the experience of uOttawa students. And he wanted to start at the source. “For me, the key stakeholder is the student,” he explains. “If we want to provide students with tools, technology and services, we need a better idea about their own reality.”

In the past, when input was required, the university used surveys to get the student perspective. But this time, Martin wanted more.

“I was looking for something more dynamic, something more open. Sometimes we already have the end-point solution, and we’re trying to make sure we find the right path,” he says. “What was really interesting is we had no expectation.”

But how to capture the insights of a diverse group of students, when efficiency was essential? Martin decided to try something new – design thinking.

Design thinking on a large scale

For help with this process, he turned to uOttawa’s new Chief Design Officer Chrystia Chudczak. “Design thinking is ideal for problems where there are no identifiable solutions,” she says. “What it offers is the ability to bring diverse voices into a space, physical or digital or a combination thereof, and work jointly toward solving a problem.”

The plans for a design thinking session with students began to take shape. To facilitate the need to capture many perspectives in a short amount of time, the team chose Nureva™ Span™ Workspace. The online collaboration tool would give them a huge digital canvas to share ideas in real time, using students’ own devices.

An expert in the use of Span Workspace, Chrystia was confident it was the tool they needed to quickly record a diverse sampling of ideas – and more. “What I like about Nureva products is they can capture culture as well – through words, through visualizations, drawings, photographs and visual narratives.”

The team booked a two-hour session, placed a large pizza order and prepped for the 70 students who signed up to come. It was an incredible response – one that excited Martin and left him feeling nervous.

“I was scared, honestly, the day before,” he says. “At some point we discussed if it was way too much. We were quite concerned that we’d need to go over the two hours.”

When the day of the session arrived, Chrystia was ready to take participants through the design thinking process with eight different activities. They ranged from icebreakers – what’s your superpower – to deeper explorations of technology needs on campus. One exercise asked students to put themselves in the shoes of a Canadian or international student, living in residence or off campus. “I asked them, ‘What are you hearing? What are the challenges you’re facing? What are your pain points?’” says Chrystia.

The students used QuickShare individually and in small groups to quickly capture ideas on their phones and send them to a shared Span canvas. Everyone could see all the ideas pop up right away on several large displays in the room.

It was loud, sometimes a bit chaotic, but it was clear the energy was coming from some very engaged and motivated students. Content multiplied on the canvas as small groups could feed off not just each other but the contributions of more than 70 others.

“It was unique for them to see ideas from their group but also from their colleagues. Everything was really visual,” says Martin. “I realized, more and more, that the physical space is really important.”

Even with the fast flow of thoughts and suggestions coming from every corner of the room, the digital tools were able to keep up. “We had momentum and were able to ramp up their creativity, but at the same time we could organize information quickly,” says Martin. “It was a success.”

The student-led discussions in the room revealed some surprising results. Martin learned that technology means different things to different students. “One student mentioned that there’s not enough elevators in one of the buildings,” he says. Elevators were not on his radar, but for that person, they were a significant impediment to getting to class.

Other revelations were not as novel but just as important. The team knew, of course, that mobile devices are everything to students. But they didn’t know all the headaches students were having in keeping them charged. “For them, that’s a big technology issue,” Martin adds.

The notes and images kept pouring onto the Span canvas – it totaled about 300 digital feet (91.4 m) by the end. The ideas were a bit raw, but that’s how Chrystia likes it. “When you use Span Workspace, you’re seeing the content generated in real time, and it’s not being ‘cleaned.’ It democratizes the experience.”

The time flew by quicker than Martin had anticipated. “Everything happened so fast during the two hours. All the insights were recorded using the technology. We have the results.”

It was a huge accomplishment to gather all that data in just two hours and end right on time. “Nureva products were able to fast track the whole exercise,” Martin says.

The team now has two digital canvases full of student data to share with all the participants. Martin and his team are busy analyzing the student input and incorporating it into their new technology strategy.

The session had other outcomes that the team didn’t anticipate. Someone on the university’s social media team came to the session. “She started an Instagram story and added a survey asking students what they wanted in their technology strategy to improve their experience,” says Chrystia. The result was 100 more responses that the team added to the canvas. Martin also heard from other university staff, looking to replicate the process to get better student input into other problems.

But for Chrystia, one of the biggest indications of success was a comment made by a staff member after the event was over. He said the session made him remember something he had forgotten – what it was like to be a student.

“To me that was profound, because that’s exactly the point of this process and this exercise.”

E21 builds a future vision of education through collaboration