Beyond beamforming – some reasons to consider other options

As it’s the technology most often featured in complex, higher-priced, in-ceiling installed systems (as well as some simpler on-the-wall or hung-from-the-ceiling mic arrays), beamforming is sometimes thought of as the leading conference call microphone solution.

However, several factors might make you rethink a beamforming system. Let’s jump in. 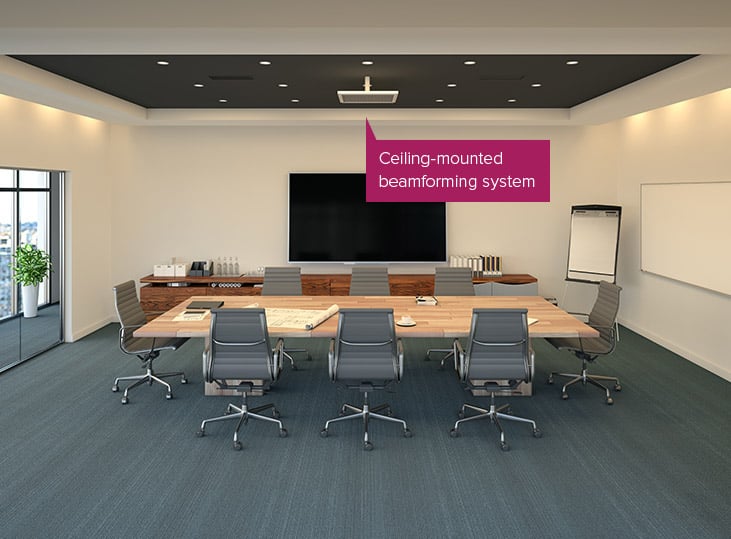 The following diagram gives you an idea of how a beamforming system works (in this case, an in-ceiling system). Beams from the mics in the mic array are aimed at specific zones in the room. In this example, it’s where the meeting participants are expected to be: in their chairs in predetermined locations. When nobody moves and everyone speaks within range of a beam, performance is fine. 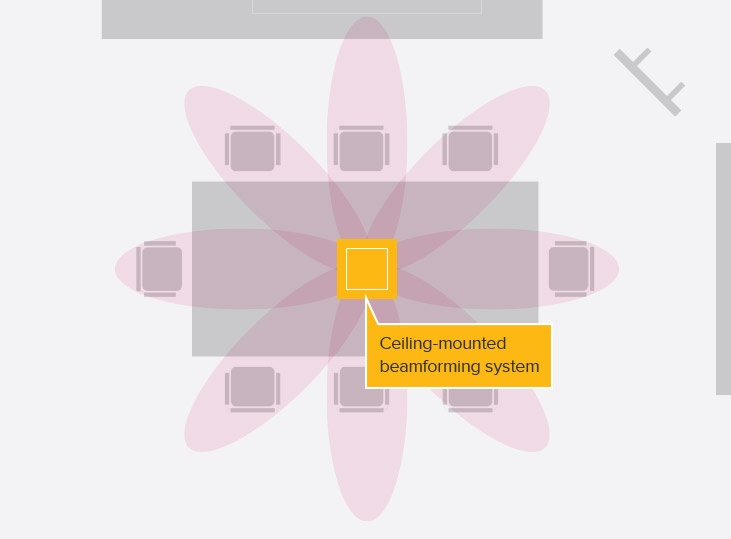 In a beamforming system, a central microphone array picks up sounds within defined beams (pink areas).

But, notice the grey space outside the pink beams. Pickup in those areas can be unpredictable and performance will likely be suboptimal (after all, the system isn’t designed for that kind of pickup). This could mean that a beamforming system will not be up to the challenges of the modern dynamic meeting where people move away from their seats, to use whiteboards, displays or other media, or talk away from the microphones.

People want to meet and communicate in the style that suits them, but not all microphone systems allow that. Also, if you want to reconfigure your room (add chairs, move the table, etc.), you will likely need a technician to calibrate the beams to get proper pickup. That can be an inconvenience, possibly an expensive one.

Adopting an in-ceiling beamforming system entails the additional costs and inconvenience of installation, initial aiming and calibration. And accounting for the noise from in-ceiling HVAC may mean your installer will have to position and/or adjust your system in a way that is less than optimal for voice pickup. 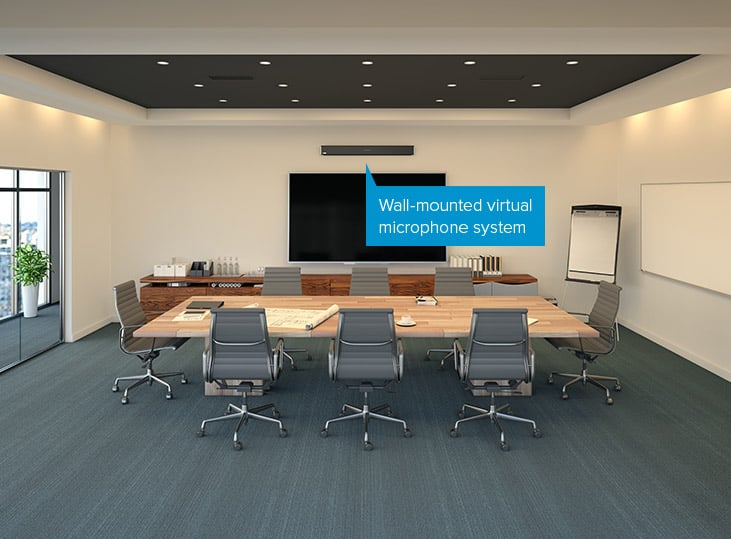 Add it up and there are some significant reasons to consider alternatives to beamforming. Probably the best reason is the availability of an alternative technology: the Nureva™ HDL300 advanced audio conferencing system.

Remember the grey areas in the beamforming installation where pickup coverage could be limited? This diagram shows the coverage (blue bubbles) provided by the HDL300 system. Its patent-pending Microphone Mist™ technology fills the room with 8,192 virtual microphones. That means the HDL300 delivers true full-room pickup, so on-site team members can move and meet how they want to. And remote team members can hear presenters without podium or lapel mics. It’s a game-changing approach to meeting room microphones.

And, thanks to its advanced system processing capability (15,000 MIPS), the HDL300 focuses on people’s voices but leaves some ambient sounds, so remote participants feel like they’re right there in the room with the team. That cuts frustrations and enables better collaboration and more productive meetings.

Installation? Easy. You hang the HDL300 system on the wall yourself in 30 minutes or less.

Calibration and updates? They’re automatic. No hassles. No technician required.

HVAC? The HDL hangs on the wall away from HVAC, and its processor focuses on the sounds you want to hear.

If you’re in charge of sourcing new conference call audio system equipment for your organization, by all means investigate beamforming systems. But be sure to also look at, and listen to, the HDL300 system. We think you’ll like what you see – and hear.

(BTW, be sure to compare beamforming with the HDL300 on price. We think you’ll really like what you hear.)

Is your AV integrator charging you too much?